Surviving the quarantine with the Proaction Lab: More Movies! 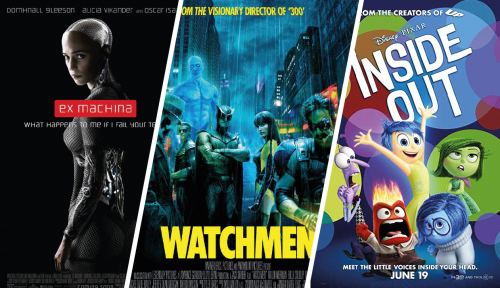 Are you a fan of the seventh art? Have you been wondering what to watch next? These three different movies are very different from one another. We have action, we have sci-fi and even animation for you! They all somehow explore subjects that relate to our field of research: psychology/neuroscience.

We love science fiction movies around here. And we gave you a suggestion from this same renowned British author before, with Devs by Alex Garland. Now we are recommending Ex Machina, a movie where a programmer is running a ground-breaking experiment, with the development of an artificially intelligent robot. The movie follows Caleb, an intern that is selected to interact with this robot, Ava, to try to understand how advanced are its human qualities. Caleb arrives in a house, that looks more like a research facility, in a private mountain that belongs to the humanoid creator, Nathan. The movie has a mysterious atmosphere, with a suspense sound and the remote location, that helps to build up the danger sensation. Along with this atmosphere, the film is rich in dialogues and ethical questions that are raised.

From the 300 director, Zac Snyder, Watchmen is a striking visual adaptation of Alan Moore and Dave Gibbons's comic book novel. The movie has the input of DC Comics and Warner Bros. The 2009 movie, sets in a dark alternate universe during 1986, throughout the Cold War. With US and Russian tensions higher than ever, the movie tells us a story about superheroes. The movie has nice noir-looking photography and depicts ethical and philosophical questions. Rorschach, a vigilant starts investigating the murder of Edward Blake, a colleague that used to be a minuteman. Minutemen were heroes from 1940 that were forced to tell their identities to the government. Rorschach then talks with other ex-watchmen, a group of American superheroes about that murder and the possible murderer. The group unites to solve the mystery, that may lead to huge consequences.

We have also a recommendation for the little ones, or if you simply feel like watching a warm, heart-felt animation movie. Inside Out is an excellent movie to learn a bit more about psychological emotions. This original 2015 Pixar Animation Studios film, directed by Pete Docter tells the story about a girl, Riley (Kaitlyn Dias) and her emotions. The emotions – Joy, Sadness, Anger, Fear and Disgust are portrayed as characters, and they try to lead her, in the adjustment to San Francisco, as Riley moves to this new city with her parents. The movie is inspired in the personality of Docter’s daughter herself, and to produce the movie, he consulted several psychologists to write the story, focusing a lot in the neuropsychological aspects underlying human emotions.

We hope you enjoy these movies. Have fun and stay safe!