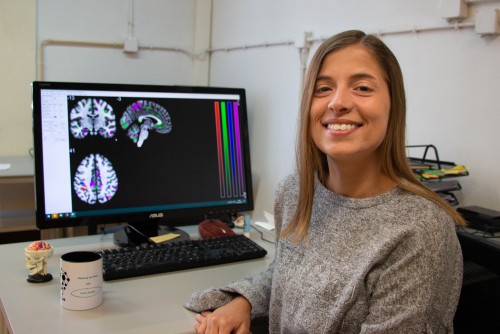 The human brain is organised topographically, that is, different parts of the brain process different categories of information. It is well known that, for example, hearing is processed in the auditory cortex (the region above the ear) and vision in the occipital cortex (in the back of the head).

Researchers have been zooming more and more, to the point of knowing that some parts of the visual cortex process information about different categories of things we see. Some areas respond more to faces, others to objects and so on. But then, others respond to more than one category. For example, the IPL (inferior parietal lobule) and the pMTG (posterior middle temporal gyrus) both process information about hands and manipulable objects (tools).

Scientists were puzzled by this finding and they had a theory that happens not only in the regions they already knew but also in other distant parts of the brain as if the information were to flow in networks.

In a recent study, researchers from the University of Coimbra have dwelled on the areas mentioned before: the IPL and the pMTG. The team asked volunteer students to participate in functional magnetic resonance studies, where they had to visualize images of different categories including, you guessed it, hands and tools. This way, the researchers were able to track what parts of the brain were active when those stimuli were entering the participants’ eyes and through the brain networks.

On the one hand, they have found that when participants were visualizing tools, both the IPL and the pMTG connected more to the Medial Fusiform Gyrus (mFUG), a distant area that is known to be process information about tools. On the other hand, when the stimuli were hands the IPL and the pMTG connected more with the Fusiform Body Area (FBA), which processes information about hands and other body parts.

Additionally, when they analyzed the whole brain for other parts of the brain that could be helping the IPL and the pMTG process information about hands and tools, they found out that there were others. However, even when the IPL and pMTG are processing the same category of information (hands or tools), they establish connecting with different parts of the brain. For instance, When processing hands, the pMTG connects with other areas related to bodily expression and action imitation but the IPL connect to areas more related to motor movement.

The researchers remain a bit puzzled about this discovery and hypothesize that “although the IPL and pMTG both process information of the same category, they seem to be interested in different aspects of these categories”, claims Lénia Amaral, one of the authors working at Proaction Lab. This is only the team’s belief, and additional studies are needed to further advance the scientific knowledge about this topic.